We have another batch of fixes and improvements this week with a focus on smoothing out some of the features that showed up with the major release. That, and whatever else the astute Wayward players reported this week. We still have a ton on our to-do, so expect another patch next week!

Bonus Tip: At 20% in a crafting skill you gain the ability to see “efficacy” when crafting. This will show how effective you are at making the craft, or making a better quality item based on what you are putting into it. It calculates what the best ingredients would be and compares it against what you used. Many things affect the efficacy of a craft, including item quality (exceptional or higher is best) and item tier (the higher the better). This is counted for both required items and consumed items. Check out the in-game help for more details on this and more.

Hope you are enjoying (or already enjoyed) your holidays! We have a patch ready to fix up some of the issues everybody has spotted after the major release launch with a few balance changes thrown in for good measure. We still got lots on our to-do list for this release series, so expect more soon! Happy New Year!

Double Bonus Promo: We are gathering feedback on a recurring Wayward multiplayer meetup to play as a community at some to-be-determined interval. Let us know your thoughts: https://forms.gle/9JHKVWihiNSstSfL8

Bonus Tip: Instead of opening the action menus every time you do an action, why not quickslot the action and use a single keypress for it? Right-click an empty quickslot to assign actions to it, or Ctrl + right-click to assign an item action to it. Item actions will automatically pick the best item from your inventory to do the action you set, saving even more time!

Twas the day before that Christmas thing, when all through Steam; not a creature was stirring, except for a Wayward release!

We are pleased to announce the release of our 11th major update on Steam entitled “Horizons”. Wayward is also a part of the Steam Winter Sale this year at -20% off: https://store.steampowered.com/app/379210/Wayward/

Take a peek at what you can expect to see in this release:

The preview video only shows a small portion of the features in this release, so if you are brave enough, venture down further to the wall o’ text:

Welcome to the 10th Wayward Newsletter where we will be focusing on previews of some of the features coming up in the next major release, beta 2.11, codenamed “Island Hopper” due to one specific feature, island maps! 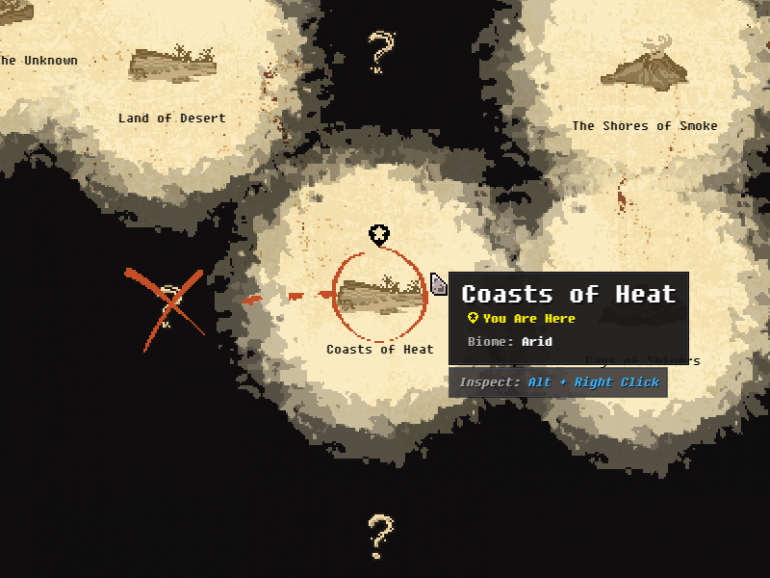 There is a new “islands” dialog, unlocked when obtaining a sea-worthy vessel, which allows you to travel or inspect nearby islands. One of the biggest features of this release is this new interface and functionality. This is essentially a world map of all the different islands you have explored and are waiting to be explored.

Another addition that works amazing with this new system is that several islands can now be loaded at a time, allowing for quicker travel and allowing players in multiplayer games to be on different islands from each other. This is a game-changer if you ever found yourself stranded when logging back on because other people traveled without you.

The range of travel is based on your (new) seafaring skill. 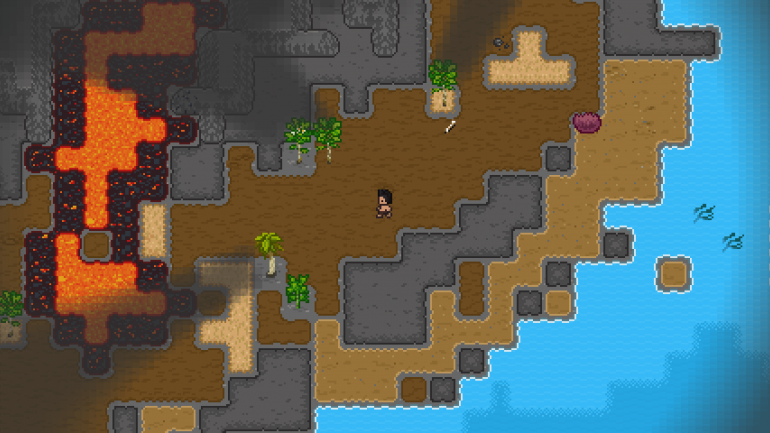 Going along with the theme of traveling and seafaring is the new volcanic island. As with all different island types, there are several unique creatures, plants, and features to this island type.

One of those is the new creatures is the hardy pangolin. So hardy in fact that you can make a new set of armor from its unique “armored” scales.

It wouldn’t be a major update without some quality of life and UI improvements. That’s where these new quickslot/action systems come into play. Here are a couple of entries from the changelog regarding this:

This is still a work-in-progress (as with everything you see here). With this new system, you should be able to do every action with a single keypress instead of two or three in many cases. You also can now move the quickslot container around to any corner/edge of the screen like all the other UI elements. We also threw a few more quickslots in for good measure. Here’s a video showcasing some of this:

Relic quality items are very rare drops from treasure chests and aberrant creatures. They have the potential to have more magical properties than even mastercrafted items, but they start with low durability. You’ll have to practice the three R’s to get an amazing item: reinforce, repair, and refine! Happy hunting! 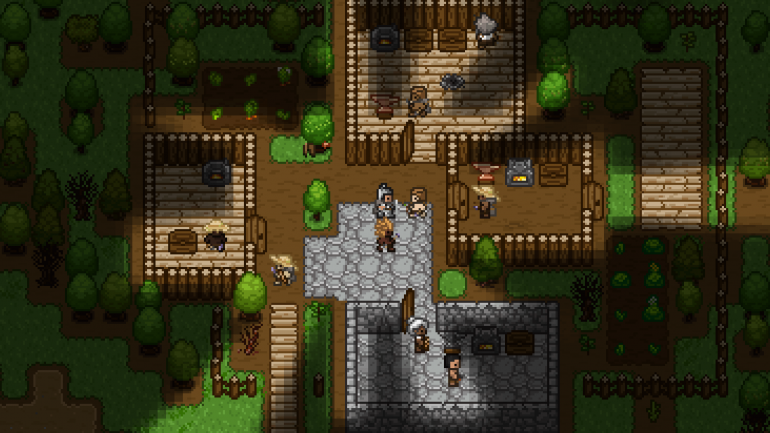 Merchant NPCs also got an overhaul! They will no longer spawn completely randomly when a new island is generated, but rather can spawn near abandoned houses and other pre-generated templates (in addition to player-built bases). They will spawn and restock based on the number of buildings (walls/floors) constructed on an island, and will decrease in odds the further out you are from your starting island, meaning you can indeed now create merchant villages utilizing these new systems. 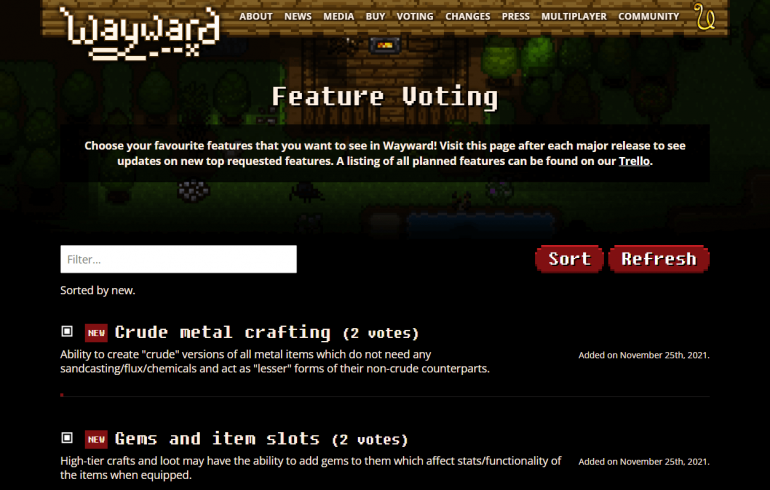 This newsletter just teases just a few of the changes coming up. Stay tuned for more! As always, check out the feature voting page to vote on upcoming features, now with a “sort by new” feature added in: 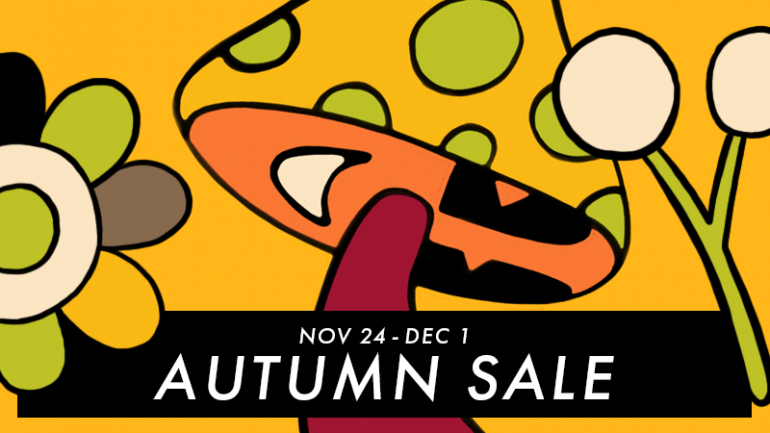 If you are reading this before December 1st, the Steam Autumn sale is already underway where Wayward is currently -20% off: 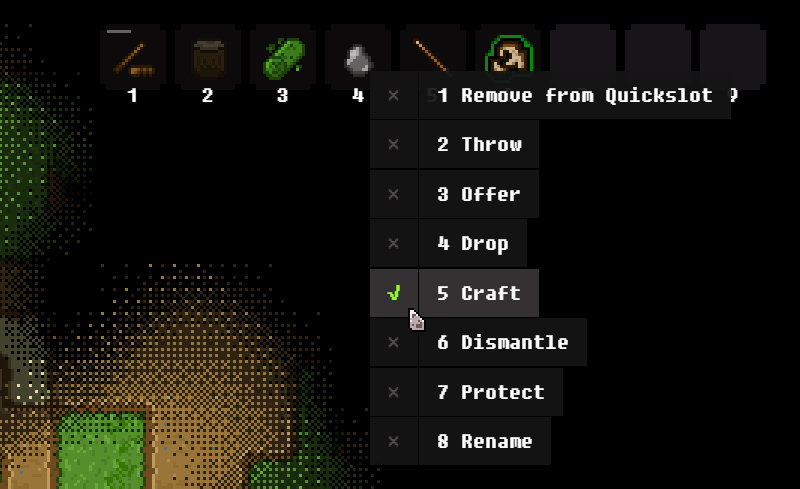 Today we are releasing what is most likely the last minor patch in the 2.10.x series. We have been working on this release while also working on our next major update to the game, which is why this took a bit longer to get out. We thought it might be better if we do the last minor releases like this going forward so there’s less of a gap in between releases. There’s plenty of quality of life improvements here and some substantial balance changes among all the bug fixes.

Enjoy! Let us know if you run into any issues. There will be more news to share on beta 2.11.0 coming soon!

Bonus Promo: Come hang out on the Discord! Although we have a smaller community, it’s still the most active spot for Wayward discussion, especially in periods of less activity like this.

Bonus Tip: If you are attempting to kill a creature and melee attacking isn’t working out for you, “there’s more than one way to skin a cat”, or probably giant rat in this case. Here are a few other options:

1. Use traps. Setting down multiple traps and guiding the creatures into them will keep you safe from damage while dealing it to them instead. The damage and success are based on your “Trapping” skill.
2. Craft or find better armor and gear. Mitigate as much damage to yourself while dealing as much damage as possible to your foes.
3. Used ranged weapons or throwing. Slings, bows, spears. All can be used to deal damage while at a distance. The damage and accuracy are based on your “Tactics” or “Throwing” skills.
4. Tame other creatures and have them fight for you! If you have tamed creatures, they will protect their master as long as they are content.

This week’s focus has been on fixing up the remaining reported issues and working on balance changes.

The balance changes mostly consist of aberrant and high-tier creature damage. Previously, they were dealing too little damage due to skill/gear power creep and previous balance changes. This should straighten out the issues spotted by several players. Let me know if you spot anything out of whack with these changes as they are quite significant in some cases/scenarios. The intention is to require you to think about what types of armor to use in certain temperature scenarios against certain types of creatures.

We also added in two new magical item properties. They were added due to an issue spotted where in some instances, items could roll an incorrect amount of properties just because not enough could be applied to certain items. These are generic enough that they should fit most items; thus, solving the issue.

View the changelog for more information on these and more.

Bonus Promo: Tons of work has gone into the unofficial Wiki as of late. Check out some of the recent changes here.

Bonus Tip: You can grab items out of fire/lava using tongs or while wearing the proper hand protection without getting burned. This is useful in some cases where you are picking up items that have caught on fire or are creating charcoal intentionally.

Patch night! This week we are taking a stab at fixing up some more issues, some of which have unsurprisingly been in the game undiscovered for years. Always great to get those ones sorted out! TARS fans will also get a kick out of this release with a heavy overhaul and a giant bunch of new features. Wayward technological singularity is closely approaching!

The beta 2.10.x patches will be slowing down coming up as we focus more on our next big major release, but we still have a bit to go yet!

Bonus Promo: Anketam has created a new spoiler-filled, “Mastercrafting Guide” available on Steam here. It goes over the requirements and strategies to create mastercrafted items. Check it out if you don’t mind the spoilers!

Hey all, this week we have another batch of fixes and some more exciting new stuff ready for your consumption! Some of the later-game players will enjoy the bug fixes and improvements this time around with a fix to a particularly annoying flaw with Mastercrafted items and some bad quality distribution with harvesting, carving, and gathering. Take a peek at the changelog below and keep reporting issues you find.

Bonus Promo: Come hang out on the Discord! Although we have a smaller community, it’s still the most active spot for Wayward discussion.

Bonus Tip: Resting and sleeping work differently when playing a multiplayer game or setting the mode to “real-time” turns, in that performing the rest/sleep actions will no longer progress time (or pass turns). Its use is shifted towards a regenerative role exclusively in these modes. 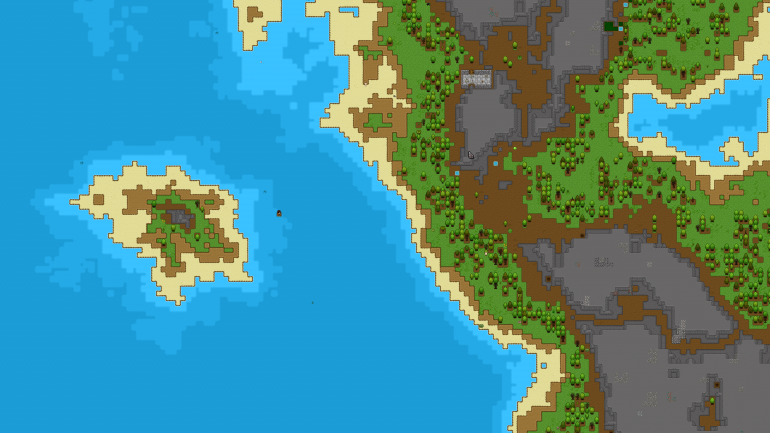