Refine/Define is the theme for this release. There’s tons of tweaks in beta 1.7! Hopefully lots of them are meaningful and noticeable. There’s some love in this release for both new players and old players alike. Hopefully we are getting close to a release which could be Early Access quality for a Steam release. 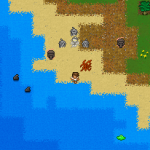 Some highlights in beta 1.7:

Read more in the changelog:

Releases seemingly have been taking longer and longer. It’s due to a lot of factors, but I can’t see those factors changing any time soon. I have a plan though, or at least an idea.

We routinely push out pre-release versions to donators as we develop for testing, but there’s periods where everything is fine, and we just wait for more changes to get pushed out. I’m thinking this might be a good opportunity to make these small batch of changes public. For these incremental patches, I would like to skip the normal “release” process. Releasing new versions of Wayward takes a lot of time, testing, uploading, writing, copying, building, etc. If I can just simply push some new changes to JUST the online version, we could get new stuff out of the majority of players without having to worry about the rest of the normal release work and also test as we go.

This will also lead to less buggy full releases, but unfortunately may mean more buggy intermediate versions. Although, maybe we could leave the bigger changes till the very end to counter-act this. Just an idea!