Just a smaller release this time around. Even though it’s smaller, it still has some great new features packed in. Here’s a few important-ish things:

You can now pass through weaker or flying creatures by disabling auto attack; however, they may attack you as you pass, leading to some more strategic escapes.

The contrast was lacking between flooring, walls, and structures. We’ve boosted this a bit to make your abode a bit nicer looking.

Introducing crafting efficacy. Starting at 20% crafting skill, you will begin to get a rating on each craft, letting you now how effective you are (using your combination of item and doodad qualities/tiers). The higher this value, the better chance at a higher quality and durability for your craft. You can read more about this in the help menu. The underlying system for this was already in place, it was just invisible to the player.

Due to popular demand, you can now set the auto save interval based on turns or time. Auto saving will also no longer stop you in your tracks, disabling movement after, and should be much more painless.

The server browser will show all games except for private games. Friends-only games and games running in different versions will now be shown so you can switch versions or shoot over a friend request if you spot a game you want to join.

Additionally, we have fixed an issue with multiplayer games and how player’s are identified. You may run into issues with pre-existing multiplayer games because of this. The player data is not lost and we can help you out if you send us over the save and the Steam IDs (or Steam profiles) of the players in the game. We will correct the saves for you. Apologies for the issues! 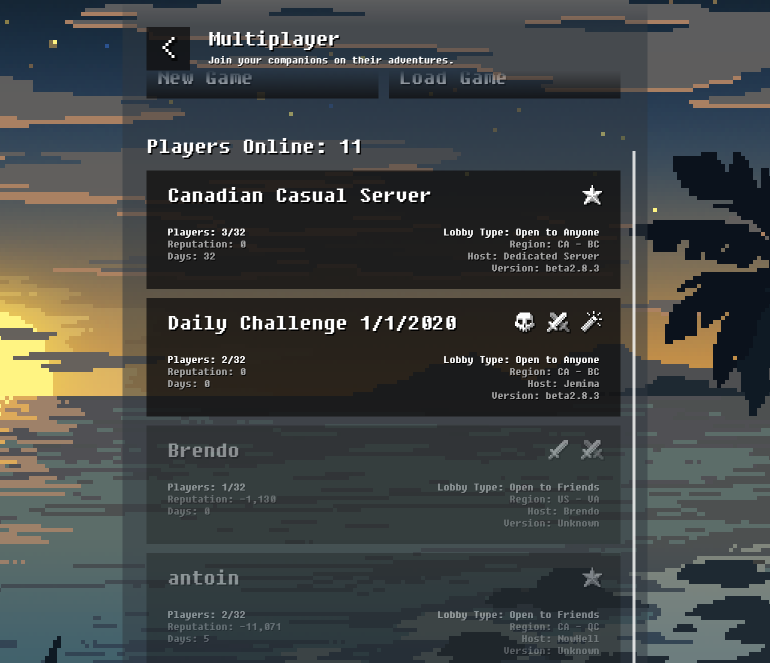 Oh ya, and Happy New Year!