We are pretty close to wrapping up beta 2.4! We are now working on the finishing touches, and will soon begin bug testing (as soon as we can get a stable development branch build). Stay tuned for more updates on that via our development discussion forum or via social media/Discord.

Beta 2.3 turned out to be our biggest major update to date, followed by some of the biggest minor updates as well, all the way up to beta 2.3.4. During this period, we were also developing the multiplayer update (which will most likely be beta 2.5 based on player feedback). Beta 2.3 introduced some highly requested features such as character customization, custom seeds, and more. A lot of the changelog in beta 2.3 focused on improvements, because we feel it is important to improve the game and fix bugs rather than just keep adding content. In beta 2.4, we are shifting this a bit in response and adding quite a bit of content this time around.

We’ve been releasing a fairly steady stream of beta 2.4 previews. If you have been out of the loop, here’s a sampling of them now:

And much rejoice was had by all! Introducing kindling groups (and wooden dowels). No more wooden pole stockpiles or searching for tree bark!

This sped up preview shows the new growth stages with custom graphics for each stage, ability to plant and grow trees just like any other plant, and the new harvest ability. 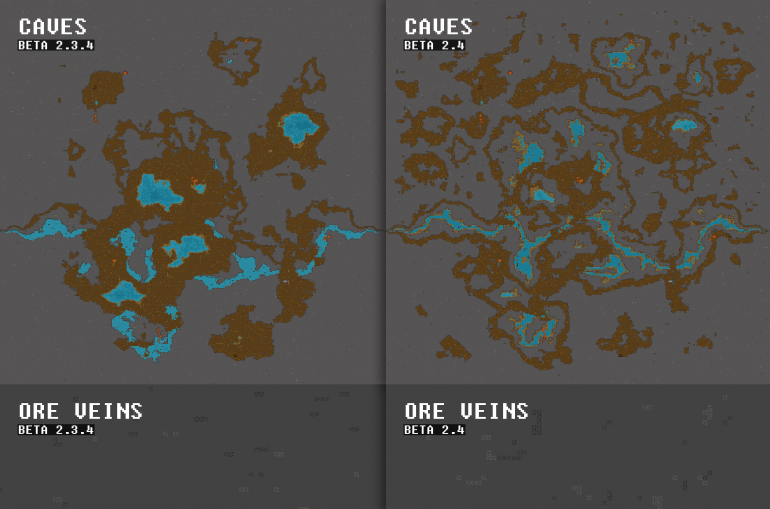 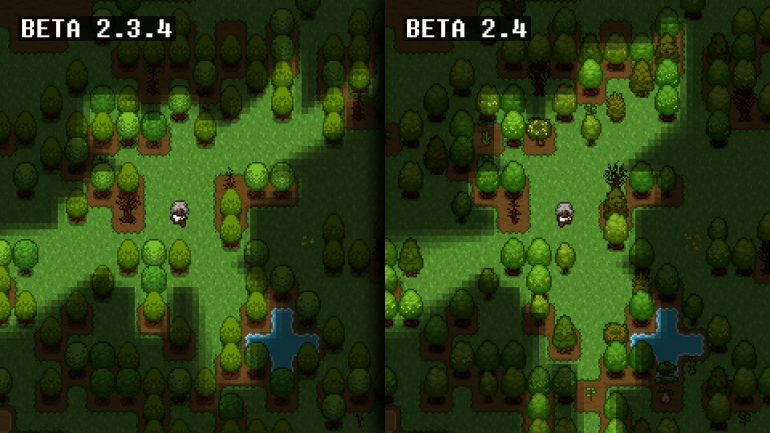 Recently, we released a player survey to help us get a better, data-driven look at what Wayward players think about the development of the project and to rate their experience with the game. We realized relying on Steam Reviews alone doesn’t give us the full picture, especially for a project that changes so rapidly.

It should only take a few minutes if you want to participate: https://goo.gl/forms/9yxE5M9LWhZSssqi2

Speaking of player feedback, our wishlist and poll for beta 2.4 this time around attracted a pretty large turn-out. Luckily some of the highest rated items were items we already wanted to focus on, like new fruits, veggies, growth stages, non-destructive harvest, renewable tree growth and more cultivation goodies. That, and a healthy dose of UI improvements. We are now also seeing a healthy amount of requests for NPCs, so that will likely be pushed sooner rather than later. Next though, it’s likely you’ll see a multiplayer update for beta 2.5 based on the response in the past.

We always get a good feeling when somebody likes Wayward enough to create mods for it. Here’s a few recent one we want to showcase.

Given enough time, everything reverts to its natural state. Malignity and benignity will slowly return to 0. The rate of this is configurable through the options.

Adds a set of beards and alternate hairdos to the character customization screen. BECAUSE BEARDS!

This mod adds a philosopher’s stone item which can be used to transmute common items like leaves or stones into more valuable ones like iron or coal.

The “Wayward Kin” Discord is definitely the place to be as a Wayward fan. You’ll see weekly-ish updates (as they happen to the development build), discussions on Wayward itself, previews of upcoming features, and probably the occasional discourse on random global economic issues or whatever. Come hang out!

There’s been a couple long playthroughs of Wayward recently, some by the likes of:

As the name suggest, Rogueliker, AKA Chris, has a channel filled with roguelike gameplay. He has covered tons of roguelike and roguelite games, recently added Wayward to that growing list.

Long Journey Divided, AKA “ACryInShame” focuses on strategy and RPG games, with most recently a lot of Factorio gameplay, but also recently mixed a little bit of Wayward into that routine.